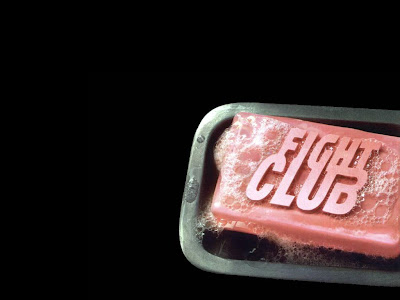 This past week I had my class view Fight Club. While I had seen the film many times before, I had not seen it for several years. This viewing opened up several new layers of the film that over the next few days I want to spend some time wrestling with.

I saw the film first in 1999 when the film came out against the advice of a good friend who was thoroughly disappointed with the lack of fighting. He had hoped that it for a boxing movie to which Fight Club is sure to disappoint. The film is certainly violent, but it serves a different purpose than a film like Rocky where the hero rises against the odds to greatness. Fight Club uses violence as a subtext to explore what is necessary to subvert the dominant paradigm of consumption.

Fight Club is a scathing critique of our branded and consumable identities. The Narrator played by Edward Norton, who remains nameless save a few 3rd person references as “Jack” is shackled by societies addiction to things. The fact that he largely remains nameless is suggestive of two things: 1) that he finds his identity in those things he buys and 2) Jack is a sort of everyman in which we are to see that we too are kept by these consumeristic desires.

In response to the question of police about the destruction of his apartment, Jack states, ““That condo was my life. I loved every stick of furniture in that place. That is not just a bunch of stuff that got destroyed, it was me!” It was ME! His identity had become those things. In a consumer culture we can buy our identity, change it on a whim because we are buying not simply clothes or furniture but a lifestyle that tells others about who we are. For Jack, identity was found in his stuff…his Ikea furniture, his AX ties and DKNY shirts etc. In one poignant scene Jack tells , “I had it all. I had a stereo that was very decent, a wardrobe that was getting very respectable. I was close to being complete.” To which replies casually, as if unbound to all forms of materialism, “Shit man, now it's all gone.” Jack’s identity was almost complete as if there is nothing of value within the self but must be supported and comforted with commodities and now, it was all gone. Without these material enhancements, Jack must now set out on a path of discovery towards who he really is.

In that same poignant scene come the most scathing critique of consumerism.

Tyler Durden: Do you know what a duvet is?
Jack: It's a comforter...
Tyler Durden: It's a blanket. Just a blanket. Now why do guys like you and me know what a duvet is? Is this essential to our survival, in the hunter-gatherer sense of the word? No. What are we then?
Jack: ...Consumers?
Tyler Durden: Right. We are consumers. We're the bi-products of a lifestyle obsession. Murder, crime, poverty, these things don't concern me. What concerns me, are celebrity magazines, television with 500 channels, some guy's name on my underwear. Rogaine, Viagra, Olestra.
Jack: Martha Stewart.
Tyler Durden: Fuck Martha Stewart. Martha's polishing the brass on the Titanic. It's all going down, man. So fuck off with your sofa units and string green stripe patterns.

Here we get a glimpse of the final scenes of the film. That this cultures ways of consumption, this lifestyle obsession is coming to an end. We are left to wonder now in retrospect, does already have his plans in mind? This is also telling for tians who are just as easily sucked into our cultures consumptive ways. We too are more interested in the personal enhancements, the versatile solutions for modern living, than issues of social justice. Certainly the health and wealth gospel only serves to uphold the cultures consumption. Messages of service and sacrifice, the Cross and martyrdom are sadly out of fashion.

If we are to critique our culture which in embedded in consumption, we must also provide a viable alternative in which we locate our true identity. Which the church has: the story of God in and t. And yet, we must be careful not to package and sell the story in the medium of that same consumeristic culture. It is a telling irony, that ’s anti consumption task force, Project Mayhem is funded by consumption or their selling of designer soaps. It points out the irony that anti-consumerism can still be sold as a product or identity. Jack says, “It was beautiful, we were selling rich women their own fat asses back to them.”

The tian faith is not another add-on identity to those we have already garnered. It is something other. Something that demands the whole self.

Email ThisBlogThis!Share to TwitterShare to FacebookShare to Pinterest
Labels: consumerism, Film, TH 541
Newer Post Older Post Home
An axis of access is a sacred place which our life revolves around. We hold them dear in our memory. They thrive in our imagination. They root us to this world. (To read more about the nature of this blog read the originating post from 08.07.07)