October of 2006 I made a mad trip around the Midwest visiting potential PhD programs. After visiting Marquette in Milwaukee I made a return trip to the city’s wonderful art museum. I say return as it had been the summer of 1997 that I was last there when we made a trip out for Summerfest. This trip was indeed special. Not only had they completed the renovations and additions to the facility that had just recently been announced on my first visit but I also had the opportunity be introduced the woderful work of Saul Leiter.

The show highlighted his early color work in the 50’s before the color process had been perfected as it is now. There was a significant collection of images as well as a small viewing room that clicked through a battery of slides. As I sat for several cycles of these images washing over me I began to see patterns rise through his view finder: the human element, repeated colors, reflections, and distance made foreground objects. What was this former Rabbinical student up to?

I have collected a few of his images from a variety of sites and made a few comments on them below. 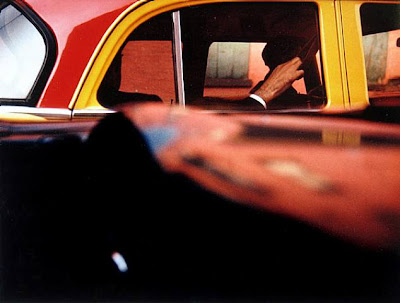 I love this image...it seems to blend all four distinctives together. We see the red of the brick building behind and the reflective red of the taxi. And of course the human element...a hand balancing a hidden body. In the foreground we see the out of focus colored reflection of another car. Perhaps we, as viewers, are in another taxi in another car. Perhaps we are stuck in traffic as they are. We are voyeurs...or less provocatively we are people watching. 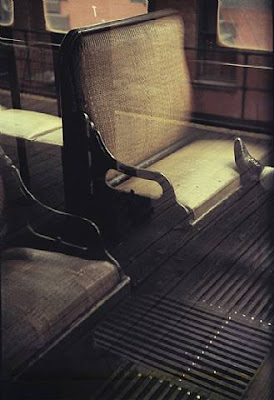 While this image is not the most captivating of his work it again follows the much of the pattern I have seen. Again the reflection forms a barrier between the viewer, ourselves and Leiter himself, and the car. And again we see the the human foot protruding from the right suggesting that there is more. We know that there is physically more to this man than what the foot allows. Are we also to see that there is more to humanity than the surface than we are allowed to see? I also love the patterns on the floor and the shine of the nail heads. 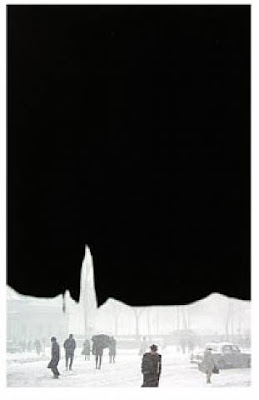 This is an interesting image. Structurally it is a strange composition with the largest part of the image being a black window canopy in the foreground. We see indistinct grey and black figures fighting a winter storm. While this is a color image, it is nearly all in the black/white tonal ranges. Also notice how the nearest tree in the background extends vertically into the seam or tear in the awning. But again we are reminded of our viewing perspective by the ominous awning which covers most of the image. We are viewers protected by this canopy.
Posted by rstander at 9:00 AM

Email ThisBlogThis!Share to TwitterShare to FacebookShare to Pinterest
Labels: Art, photographers, photography
Newer Post Older Post Home
An axis of access is a sacred place which our life revolves around. We hold them dear in our memory. They thrive in our imagination. They root us to this world. (To read more about the nature of this blog read the originating post from 08.07.07)