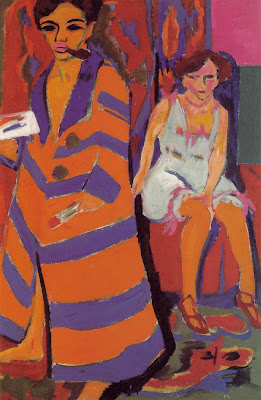 One of the artists that I have enjoyed looking at recently is Ernst Ludwig Kichner (1880-1938). Kirchner was the leader of the small (Kirchner, Karl Schmidt-Rottluff, Erich Heckel and Fritz Bleyl), but potent, Die Brucke in Munich during the German Expressionist movement. Translated, Die Brucke means “The Bridge” symbolizing the revolutionary transition from the present to the future for the arts. Following the Fauves originating show in 1905, Die Brucke emerged one year later with faith in youth to move beyond the reach of traditions that had grown dull, particularly Impressionism and Neo-impressionism, which no longer carried meaning in the rapidly accelerating technological society of the early 1900’s. (It is interesting to note that both major German groups of this time, Die Brucke and Der Blaue Rider take an anti-technological critique while the Italian Futurists praised the technological advances). By rejecting Modernisms technological climb, many artists of the period (Gauguin, Picasso, Matisse to name a few) picked up non-western art of Oceania and African origin. This primitivism allowed new techniques and subject matter.

One of Kirchner’s central pieces is titled Self-Portrait with Model begun in 1910. With a violent color palette the artist stands central, cropped on top, bottom, and left side with the model sitting in the background. Kirchner’s prominence is suggestive perhaps of the centrality of the artist ego as well perhaps in an analogous form for the generalized role of the all artists. As we try to read into the colors we are confronted with the model figure in the background. What is the relationship between the two? What is her state of mind? Is she a muse or victim? Kirchner stands naked save for an unbuttoned robe as he holds a phallus like brush dipped in red paint. Notice also he is turned away from his model as she averts her eyes, chin down slightly, uneven shoulders, arm stretched across her body with her knees drawn together. Is this a position of fear? Anger? Abandonment? Shame? A combination of all? Has she been violated by the artist? Could this be a metaphor for the task of the artist?
Posted by rstander at 9:15 AM

Email ThisBlogThis!Share to TwitterShare to FacebookShare to Pinterest
Labels: Art, artists
Newer Post Older Post Home
An axis of access is a sacred place which our life revolves around. We hold them dear in our memory. They thrive in our imagination. They root us to this world. (To read more about the nature of this blog read the originating post from 08.07.07)