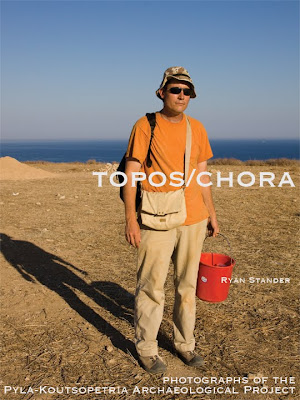 “The Pyla-Koutsopetria Archaeological Project (PKAP) has investigated the 2 sq. km coastal zone of Pyla Village in Cyprus since 2003.  The project is a transdisciplinary, landscape-oriented investigation that has drawn upon an international team of archaeologists, historians, geologists, illustrators, and other specialists to produce a vivid, diachronic, archaeological history of a significant coastal site.”

My work for the PKAP residency functions on several levels: documentary, landscape, and archive of topos and chora.  By drawing upon both ancient conceptions of place, I was keenly aware of our contemporary presence in the landscape as researchers. This reflexive stance guided my efforts to document this emerging diachronic perspective of the historical landscape. As human presence transforms topos to chora it becomes archaeological evidence. Similarly, the photographic project provides a document of ongoing human presence and an archive of evidence of the 2009 PKAP field season and this Mediterranean landscape.

Email ThisBlogThis!Share to TwitterShare to FacebookShare to Pinterest
Labels: photography, PKAP
Newer Post Older Post Home
An axis of access is a sacred place which our life revolves around. We hold them dear in our memory. They thrive in our imagination. They root us to this world. (To read more about the nature of this blog read the originating post from 08.07.07)