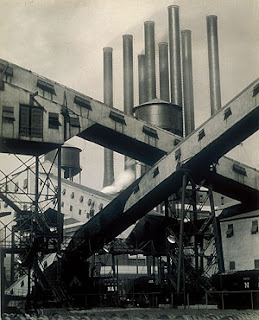 This semester is slipping by all too quickly and I have failed to keep up with my writing here.  My hope had been to do a series on the work of Sheeler as a source of inspiration for my recent elevator series.  Its now 2/3 of the way through September and I have yet to draw those connections.
Charles Sheeler (1883-1965) is known more for his painting as a key member of the precisionist school than for his photography.  That being said, for a short time, Sheeler was the leading photographer in the United States and perhaps even beyond.  In 1913 Sheeler exhibited 6 new paintings in the Armory show and about the same time, Sheeler picked up the camera to make ends meet shooting architecture around the Northeast.  In 1915 Sheeler's photography moved forward into abstraction with the photograph Side of White Barn (seen below).  Sheeler now sought to merge photography's realism or indexicality with Modernity's drive toward abstraction.  His goal was to show that the basic elements in Modern art, particularly cubism, existed within nature.
Sheeler also employs another key to Modern art, that of flatness.  Through photography, Sheeler is able to explore real depth and the flatness of the actual image through light, shadow, line, form and the overall composition.  What emerges in his work is a bold geometry and structure of the American industrial ediface.  The first image is of the Ford Plant and the second graces the cover of the book I read this summer...certainly the finest coverage of Sheeler's photographic work. 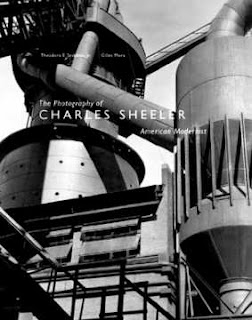 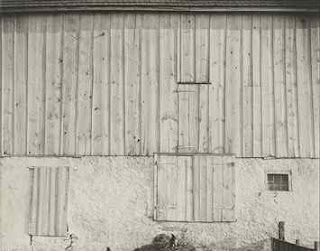 Email ThisBlogThis!Share to TwitterShare to FacebookShare to Pinterest
Labels: Art, Elevator Series, North Dakota, photographers, photography
Newer Post Older Post Home
An axis of access is a sacred place which our life revolves around. We hold them dear in our memory. They thrive in our imagination. They root us to this world. (To read more about the nature of this blog read the originating post from 08.07.07)