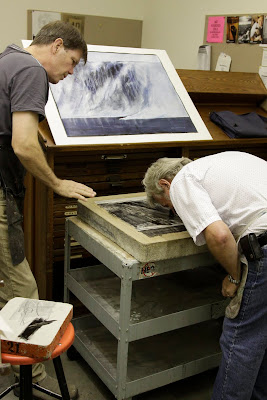 A few weeks ago UND was host to Helge Skaanlund, a visiting artist from Norway. Helge is typically a painter, but has also worked in commercial printing. One of the great things about UND is their visiting artist program and the time these artists spend with students. In the printmaking area, students generally get to help the artists print as well.
While Helge was here, we pulled three different prints series. One larger traditional stone litho seen in most of the image of a Norwegian landscape. Helge worked from a painting as seen in the first image where he is checking the surface of the stone.
Helge's other images were more cartoon line drawings of traditional Viking figures. The second image, UND grad student Anna Jacobson assists with the editioning process. Generally the artist takes half of the edition and half stays with the print studio.
The 3rd image is a close up of the print which Helge later went into with a small brush and red ink to color the top of the light house barely visible on the white area that juts out into the water. The 4th image is our fine printers...Josh and Jess. And the last image is Josh and Helge sorting though the batch of prints that will make up the final edition.
This was my first time to assist and observe the nearly the whole process of working with a visiting artist. I sat and photographed most of the time, but was allowed to put both Josh's and the studio's chop on...not much but its a start as I slowly learn this world of printmaking. Its a lot of fun to see the team work together and produce work with an artist. 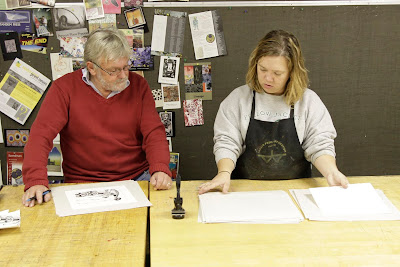 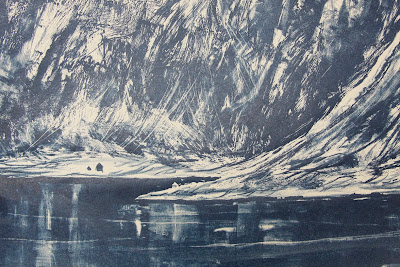 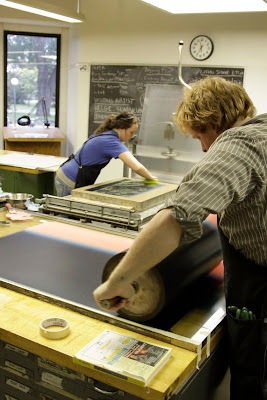 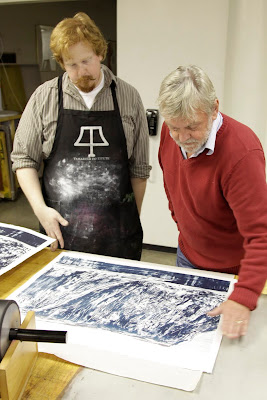 Email ThisBlogThis!Share to TwitterShare to FacebookShare to Pinterest
Labels: Art, artists, North Dakota, printmaking, University of North Dakota, visiting artists
Newer Post Older Post Home
An axis of access is a sacred place which our life revolves around. We hold them dear in our memory. They thrive in our imagination. They root us to this world. (To read more about the nature of this blog read the originating post from 08.07.07)