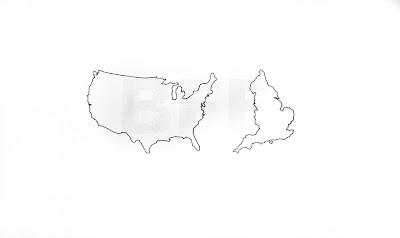 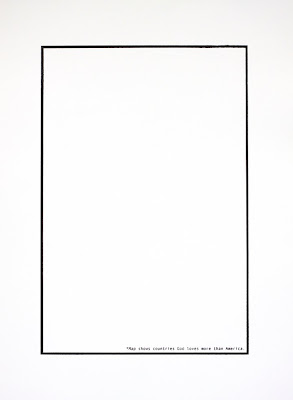 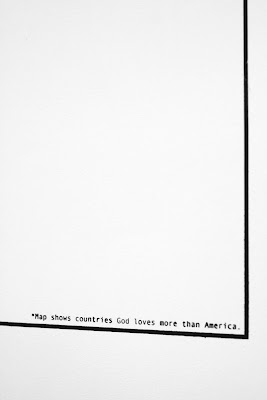 Somehow it is already the 4th week of classes? Where did this past month go? I have made great progress on my print for the semester. So rather than waiting until the end of the semester I thought I would put up a few now.

This semester's focus is on mapping. Toward the end of the summer I started playing with a few cultural maps. See them here. I am taking a similar approach to my current series as I did for the fly-over states print by hand tracing the map and using a separate plate for text formatted in Photoshop.
The first map, is from a larger series that will show up here over the next few weeks. It might be called something like Foreign Policy, with a companion series Domestic Policy. It plays with the idea of cartography as a shorthand in a sense for real places. Here it is paired with a text abbreviation, another shorthand, that describes some sort of foreign relationship the United States has with another country.
The 2nd print is suggestive of a stereotypical arrogant American attitude about the rest of the world and America itself.
Posted by rstander at 3:59 PM

Email ThisBlogThis!Share to TwitterShare to FacebookShare to Pinterest
Labels: Art, printmaking, University of North Dakota
Newer Post Older Post Home
An axis of access is a sacred place which our life revolves around. We hold them dear in our memory. They thrive in our imagination. They root us to this world. (To read more about the nature of this blog read the originating post from 08.07.07)