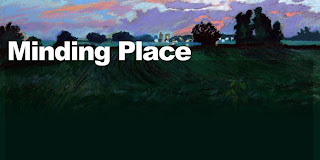 I am excited to share that I have been invited to present at Northwestern College's Day of Learning in Community, which is part of their Minding Place Symposium. Kathleen Norris will be the keynote speaker for the symposium. It was Norris' work, Dakota, that introduced me to the conversation of place and its significance in our daily life.

I will be sharing the work I've previously presented at CTS & AAR but with some foundational updates and new questions.
Below is the release for the DLC.
The Day of Learning in Community is an annual event (starting in 2008). The day’s theme will vary, as will the particular day. Nevertheless, the point of the day is to set aside the normal confines of classes in particular disciplines or majors in order to allow for intentional interdisciplinary learning in Christ around the chosen theme. All regularly scheduled classes are set aside for the specified day. A special guest will address aspects of the theme in two or more plenary sessions and possibly in other smaller venues. Further, in the afternoon and at other appropriate times during the day, faculty, staff, and students will present workshops, performances, exhibitions, etc. that tie to the theme.

The theme for the 2008 Day of Learning in Community is minding place. “Place” is about humans in relation to various locales, from the small—e.g., the body or a dorm—to the large—e.g., a region or a galaxy—and from the corporeal—e.g., a building or a community—to the incorporeal—e.g., an intellectual tradition or virtual space. We make places, and places in turn help make us. We dwell in some places more than others, and we also cherish some places more than others. At times we alter, conquer, or destroy places, and at times different places repel, overwhelm, or divide us. Being somewhere is a fundamental aspect of being human; “To be is to be in place,” notes philosopher Edward S. Casey.

All creation was initially placed by God, according to Genesis. Since creation, however, life has included the dynamics of displacement as well as placement. Adam and Eve were expelled from Eden, and they and their descendents have sought to make a home ever since. God’s people have been paradoxically placed and displaced; they have been called to abide with God, yet be on the move, to be in but not of the world. And the God who has made this call modeled being in but not of the world. In the Incarnation, God took place, and in the cross and the resurrection, God redeemed us and all creation, including all our places. Rooted in Christ, we hope for transformed places in a New Creation.

Place in this open-ended sense is something to be mindful of—to remember, to critically think about, to be attentive to—especially when we acknowledge, as we do in 2007-2008, that Northwestern College has been in place for 125 years. The events of the 2008 Day of Learning in Community are meant to be mindful of the theme of place.
Posted by rstander at 11:46 AM

Email ThisBlogThis!Share to TwitterShare to FacebookShare to Pinterest
Labels: misc., northwestern college, sacred space
Newer Post Older Post Home
An axis of access is a sacred place which our life revolves around. We hold them dear in our memory. They thrive in our imagination. They root us to this world. (To read more about the nature of this blog read the originating post from 08.07.07)