Cold War and Religion in The War of the Worlds 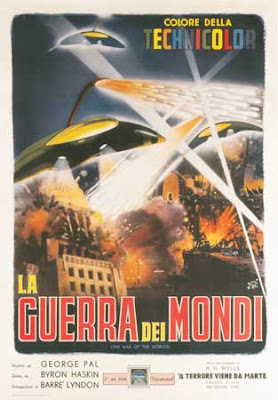 Thursday night Karina and I watched the 1953 version of H.G. Wells classic The War of the Worlds. The story, for those who may not know or have seen the more recent Steven Spielberg production, tells of a technologically advanced alien race with intents on destroying the earth.

I found several things remarkable in the film. First at the time it was made the United States, which is where 99% of the film takes place, with only a few references to the landings around the world and the valiant efforts of the British, was embroiled in the height of the Cold War. The fear of the other as alien is obvious, but the film capitalizes on the time periods fear of the Russians. American’s fears of greater weapons residing with their opponents, their weapons being useless, being infiltrated, their efforts for peace ignored are all present as a subtext to the alien invasion.

Religion also plays a prominent role in the older version. Pastor Dr. Matthew Collins played by Lewis Martin before approaching the alien craft suggests, “I think we should try to make them understand we mean no harm.” He goes on to say that “they too are living creatures.” His reasoning is that if they are more advanced creatures than humanity then they must be nearer to the Creator. And since no attempt had been made to communicate with them, he approaches reciting the 23rd Psalm, and subsequently is killed by the alien. I cannot help but to view this through that cold war lens. Is this a scene depicting the religiosity of the West and the Godlessness of the East? Pastor Matthew takes the high road, and acts with compassion trying to understand the creatures and his advances are met with contempt and heat rays. Another key scene is set inside a Los Angeles cathedral where many are gathered for safety and prayer. Not even this sacred spot was safe from the violent creatures.

But I also wonder if religion is portrayed all that positively. Could it be that the priest is actually the fool for attempting peaceful relations with the other? Many prayed for a miracle that the creatures could be stopped, but the explanation was biological rather than theological. Are we seeing the triumph of science over religion as well. Is this another subtext for an American audience?

If communism is the primary underlying fear behind the portrayal of the aliens, their utter destruction of all that is sacred in the American way of life would imply the same is to be expected from a Russian invasion. Not only is this a riveting science fiction tale, if the cold war is an accurate subtext it would seem to be another piece of American cold war propaganda.
Posted by rstander at 8:39 AM

Email ThisBlogThis!Share to TwitterShare to FacebookShare to Pinterest
Labels: Film, priests in film
Newer Post Older Post Home
An axis of access is a sacred place which our life revolves around. We hold them dear in our memory. They thrive in our imagination. They root us to this world. (To read more about the nature of this blog read the originating post from 08.07.07)