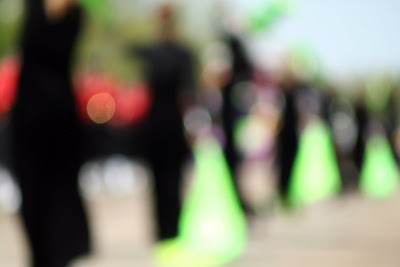 The 3rd weekend of May in Orange City, Iowa is the celebration of the towns Dutch heritage in the Tulip Festival. This year's late arrival of spring kept the tulips around longer than some recent years (in which case we celebrate the stem festival).

Tulip Festival is a homecoming of sorts where family and friends come from far and wide to visit, remember and rehearse a living and embodied memory. 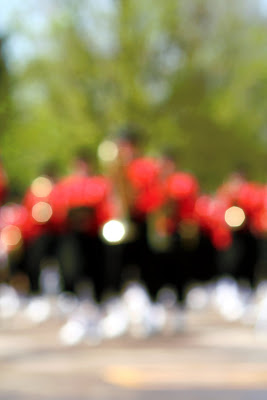 ival becomes a photographic event for many.

This year I went with a couple things in mind. First, with my recent studies in ritual and narrative theology, of which memory is a key component, I have been wondering how memory is connected to photography. Also, how can the work of art itself function and convey the properties of memory. One of the ideas I have been toying with is focus...blur...movement. Memory is not exact recall but rather a living thing that changes over time and yet is instantly recognizable. The first two images here are of the MOC-FV High School Band - Pride of the Dutchmen Marching Band. I would dare say that most in the area would recognize in these two images this band who regularly travels the country to perform in their wooden shoes. The red coats, the black pants, and the white shoes in the context of Sioux County would be unmistakeable. The first photo catches the neon green blur of the flag corp, while the second portrays the band itself. 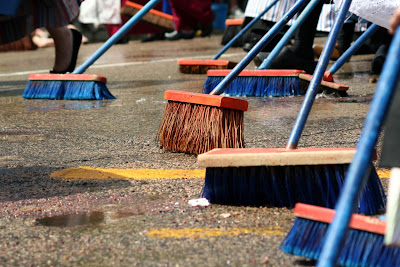 Secondly I wanted to photograph the specatacle or ritual itself; particularly the street scrubbing which is done every parade, each of the 3 days, every year so that the Tulip queen might pass. In these two photos we see the characteristic orange and blue of Dutch culture in both the brooms and buckets. Men come along pouring water from their buckts onto the street where women and young girls push brooms to clean the streets. This broom sticks and their angles struck me in this photo. The second photo offers a view of the men and boys lining up to dip water from cattle 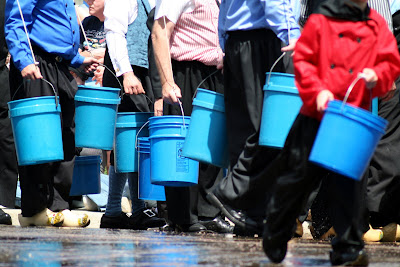 tanks filled with water along the street side. What struck me in this photo is the line of buckets of boys and men. Here we see the tradition at work. Young boys participate and grow into a tradition, learning its ways of being, virtues, hopes, etc. The older men show the younger the proper way, conducting the show, restraining the playful water throwing of the boys, and at times playing themselves.
Posted by rstander at 8:38 AM