Docetism and the Sculpture of Rodin 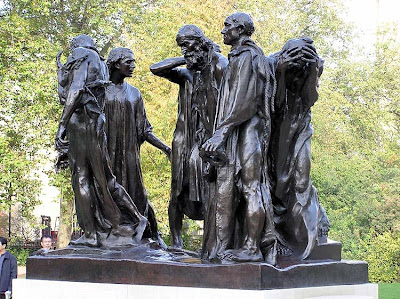 Auguste Rodin was one of, if not the greatest sculptor of the Modern art era. The other day I was reading about one of his most famous works The Burghers of Calais (1897-98). The work is pivotal for several reasons. First it is a sculpture in the round with figures and movement in all directions. This is a novel movement for Modernism. The real profundity of the piece is that Rodin had hoped to place the figures directly on the ground, a certainly radical move at the time. Rodin claimed his original plan had been to “fix my statues one behind the other on the stones of the place, before the , like a living chaplet of suffering and sacrifice…and the people of of today would have felt more deeply the tradition of solidarity which unites them in their heroes.”

All of this got me thinking. What effect did Rodin hope to cultivate by placing his work on the level of its viewers? What is the effect of raising a statue above the people? We must also know that the sculpture is marking defeat during the Hundred Years War and not victory…itself an odd thing to commemorate.

As I read these curious lines I started thinking about the incarnation and the many tological heresies of the first few centuries as followers struggled to tease out and understand who t was and how best to articulate that which is tangibly near and yet simultaneously beyond our comprehension.

Can we see in Rodin’s struggle to implant a memorial among the townspeople of a feeble metaphor for the incarnation? By placing the sculpture on the ground, rather than on a plinth, the sorrow is brought to their level of the everyday. By doing this they are united in a more physical manner than if lifted high above their heads.

So too with the t. Incarnated among us. This is no docetic Savior who pretended to be human. There can be no Gnostic dualism here. Docetism sought a divine savior who had no real connection to humanity. But where Rodin’s figures and the t are truly remarkable is their feet touching the ground among us. Where Rodin hoped to inspire solidarity with the community of , t inspires God’s solidarity with a fallen and broken humanity.

Email ThisBlogThis!Share to TwitterShare to FacebookShare to Pinterest
Labels: Art, theological musings
Newer Post Older Post Home
An axis of access is a sacred place which our life revolves around. We hold them dear in our memory. They thrive in our imagination. They root us to this world. (To read more about the nature of this blog read the originating post from 08.07.07)