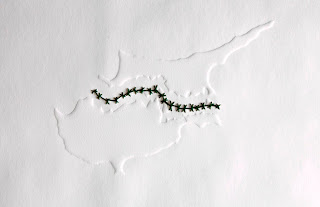 One of the things that came out of my summer residency in Cyprus with PKAP was the awareness of the contested nature of place and landscape. Cyprus is currently divided in half by a United Nations guarded neutral zone cutting the Turkish North from the Greek South. In recent years the gates have been reopened for residents to pass back and forth more easily. I made two prints with these ideas in mind. The first is a blind embossment of the island of Cyprus with a series “X’s” embroidered along the green line in such a way that it mimics not only the guarded barbed wire strung along this artificial line, but also the utter geographical, political, ideological, and religious divides that continue to plague these landscapes. My hope is to continue this series a little further as well by exploring other contested spaces/places which may well extend beyond landscape into ideological spaces/places.

The second print takes two urban landscape images; first, of the Turkish North and one of the Greek South and placed them next to each other as in a diptych. I then used Photoshop to cut and paste the copious amounts of graffiti that covered most city blocks in both the North and South. The graffiti represents the literal plurality of contests marked upon the landscape. 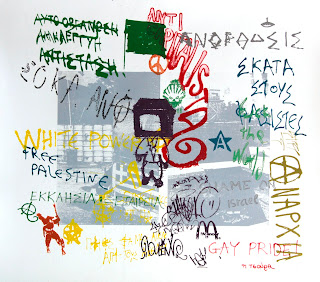 Email ThisBlogThis!Share to TwitterShare to FacebookShare to Pinterest
Labels: Art, graffiti, PKAP, printmaking, University of North Dakota
Newer Post Older Post Home
An axis of access is a sacred place which our life revolves around. We hold them dear in our memory. They thrive in our imagination. They root us to this world. (To read more about the nature of this blog read the originating post from 08.07.07)