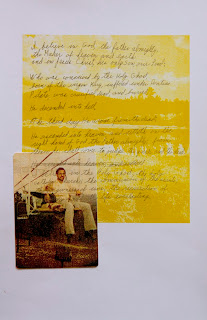 I've begun a new series that I hope to carry into the spring building off of, or modifying some work I did this past semester. Last Christmas break I returned to campus with my family slides and began scanning them to use for printmaking purposes. My hope then was to make 4-color separation prints of my father and me distanced by a landscape (either mine or his). I never got around to making this idea, though I held on to it. This semester I began making the Landscape of Belief series which took creedal type statement overlaying a landscape to suggest how such statements orient us, as maps do, within the world.
This new series, however, combines those ideas and builds on them. The two prototypes seen here take a photo of my father and me on a ski lift at Terry Peak which then is chine colle'd on to a landscape with the Apostle's Creed, in my fathers handwriting over both. My ideas still include the statements as orientation bits, but they become more personal and intimate by including a photo of my father and me. My hope is to extend the series to encompass men and their sons or men and their mentors and the impact their words have had on their life. Daniele Hervieu-Leger's text Religion As A Chain of Memory rests a base conceptual idea beneath this project. Her sociological approach considers the decline of religion and contention that in today's culture, religion must be a chain of memory...where individuals become part of a community that links past, present and future shared as a collective memory.
I am beginning with my own family, simply because I have access to the photos. But I am seeking volunteers to be included in this series. If you are interested in sharing a photo and a short reflection on your sons/father/mentor please let me know. There may even be a print in it for you.
Neither prototype is perfect but I am curious as to which might have the stronger visual attraction. Thoughts? The text in the print on top is darker, and most who have seen the two appreciate the darker text. 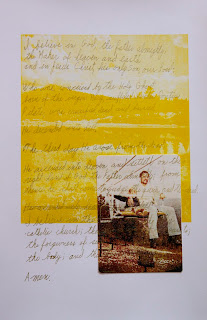 Email ThisBlogThis!Share to TwitterShare to FacebookShare to Pinterest
Labels: Art, printmaking, religion as a chain of memory series, University of North Dakota
Newer Post Older Post Home
An axis of access is a sacred place which our life revolves around. We hold them dear in our memory. They thrive in our imagination. They root us to this world. (To read more about the nature of this blog read the originating post from 08.07.07)