More New Prints From This Spring 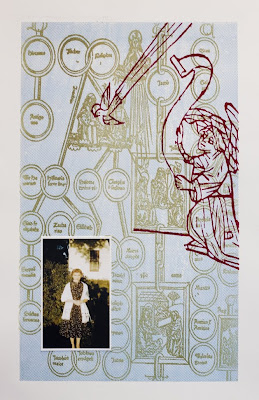 Its been a busy spring but I have managed to create several prints. This top image is the most recent and draws connections in both theme and aesthetic to the Religion as a Chain of Memory series. This print takes an image of my mother and places it over Medieval manuscript image of a family tree. Along side it is another Medieval image of the annunciation to Mary. My hope is to suggest similar things to those prints of my father, but without using text.

The next image is a reworking from another failed attempt. I like the idea, but both this and the previous rendering have failed to live up to the idea for me so I have begun again to create this print. The image on the right is John the Baptist from the Isenheim Altar piece. In it, he points to Christ on the cross. In place of the crucifixion, I have instead replaced it with consumer logos that are meant to correspond to the four central parts of the Easter Vigil (roughly the services of Light, Word, Baptism, and the Eucharist). All of which hover over the text of John 1 in Latin.

The last print is just a little experiment from both my printmaking and alternative processes photo class (those images to come later this week). It takes a lithograph of a cropped Medieval manuscript drawing of the Ascension and places it over wonderful cyanotype image of a late summer Iowa sky. 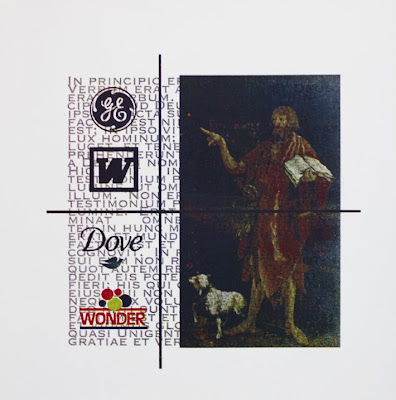 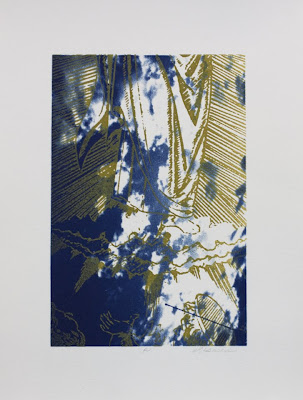 Email ThisBlogThis!Share to TwitterShare to FacebookShare to Pinterest
Labels: Art, liturgy, printmaking, religion as a chain of memory series, theological musings
Newer Post Older Post Home
An axis of access is a sacred place which our life revolves around. We hold them dear in our memory. They thrive in our imagination. They root us to this world. (To read more about the nature of this blog read the originating post from 08.07.07)