New Prints From this Spring 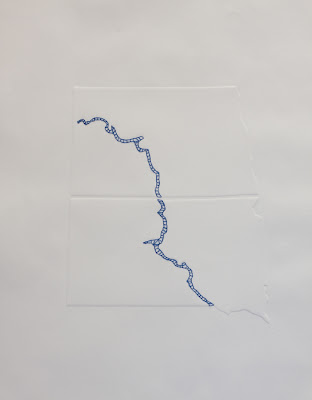 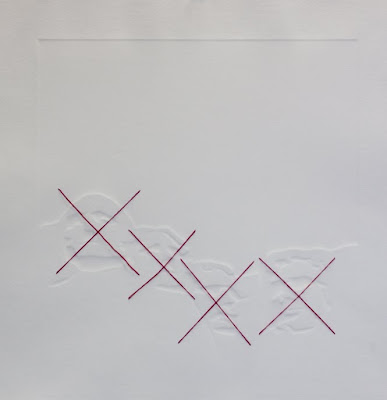 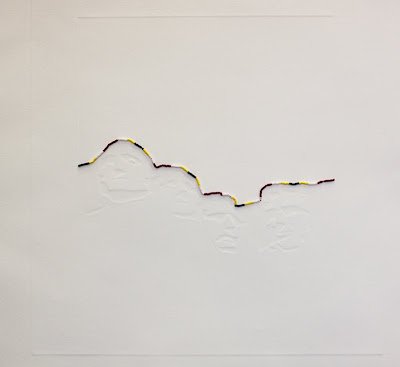 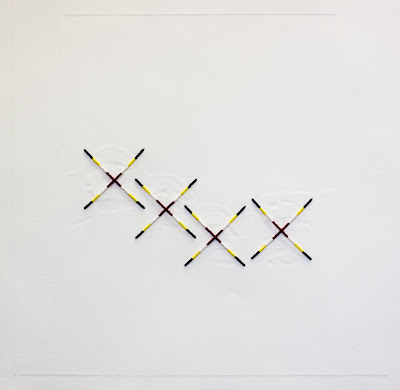 It has been a long time since I've posted any artwork...or much of anything. Ive continued on in this series of Contested Space embossings. The first included here is the Missouri River which is contested on not only water rights, damming, flow, and native lands, it also divides the Dakota's geographically into East and West river. In each state, the river divides its culture and its topography.
The second print also portrays a contested space...that of Mount Rushmore. The site is sacred not only to good patriotic American's, it is also a sacred site to the Native Americans. A few years ago, when I started thinking about sacred space, Mount Rushmore was foremost in my mind. I had never thought about it as a Native sacred space. But what happens when a colonialist people literally reshape a holy mountain in homage to their rule and build a tourist attraction upon a sacred site? It becomes a contested site.
This print took several tries to get it where it is today. The first with simple red thread conveyed the contested nature, but in the end seemed simply too anti-American. In the second, I added beading to connote the Native role in the contest over this place. Here I ran the beading along the heads to highlight the aspect of the landscape itself but at the expense of highlighting the contest. The third option, the one Ive ended with returns to the X's but with beading. Not only do the X's symbolize the contest over place, they also draw more closely from Native artwork where the 4 directional colors (as I have used) are placed in a vertical and horizontal axis. I simply have turned it on its side to make the X.
While I've not completed all the prints in this series, I expect it to be editioned in 5.
More prints and photos to come shortly from this semester.
Posted by rstander at 6:48 PM

Email ThisBlogThis!Share to TwitterShare to FacebookShare to Pinterest
Labels: Art, contested space, printmaking
Newer Post Older Post Home
An axis of access is a sacred place which our life revolves around. We hold them dear in our memory. They thrive in our imagination. They root us to this world. (To read more about the nature of this blog read the originating post from 08.07.07)