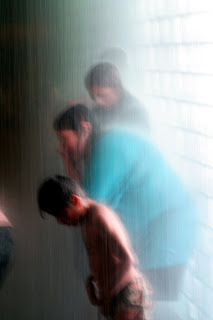 I've been asked to submit several photos for an alumni showing at Northwestern College's 125th Anniversary celebration and homecoming. The show goes up at the beginning of October with an 11 a.m. reception with the artists at Te Paske Gallery, Korver Visual Arts Center in Orange City IA. I have attached the entered photos, though I am not sure which of the four will be hung.


This image was taken in Chicago at the new Millenium Park of the Crown Fountain. It was hot humid night in August when I took this. I imagine this place to be for today's children what the fire hydrant was for city children in past decades. This evening rather than projected faces on the glass brick facade it was a waterfall cascading water down on the children. 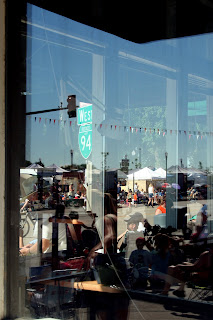 This summer on our trip home we stopped in New Salem ND to visit friends. We decided to head to nearby Mandan for the 4th of July parade. It was hot without a cloud in the sky. And the sun seemed to be at an astounding intensity. As I stood in the shade of an awning I saw the corner windows and the layers of reflections. When I examine the picture I leads me to questions of reality...What is real and what is reflection? It takes some time for my eyes to sort things out. What is infront? What is behind? What is inside? What is out? 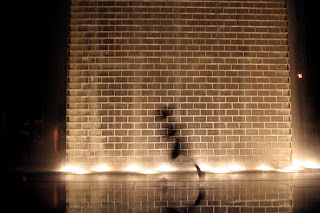 This is another shot at Millenium Park in Chicago. I am not sure of the dimensions of the tower but children were chasing each other around as children do. So I slowed the shutter to catch the movement of the scene. This child caught sprinting through the downpour is reduced to a shadow of movement. Having spend quite a lot of time considering the body this year it makes me think of the relative speed with which our bodies grow and decay. That while certain things have a percieved permanance, live is rushing by in front. 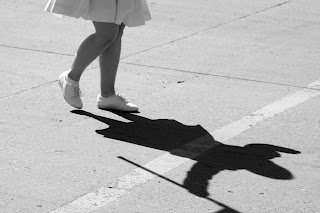 This shot is also from Mandan ND. Again this fits into my explorations of the physicality of the body. This is the second showing of this photo as it was jurored into the Sioux Falls Common Ground exhibit. The bright sun of the day created such stark shadows that just struck me as I wached the shadow move in strange unison with the body. And it is the physical body that makes a shadow possible.
Posted by rstander at 7:53 AM