Guns, An American Promise, and a King James Bible 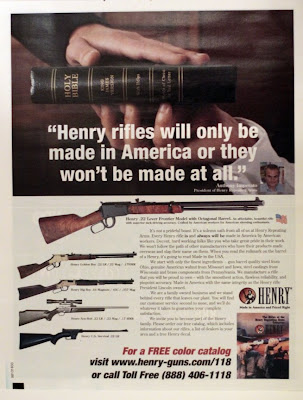 Today as I rode the elevator up to my apartment casually browsing through the mail I had just picked up, I stumbled upon this little jewel of an insert in the local ads.

I couldn't believe it.

Are you kidding me?

.My first impulse is to let my cynicism prevail and stereotype the target demographics of such an ad. But there are serious issues at stake.

Beyond profaning, what millions consider a sacred text by using it for advertising, the ad makes further uncomfortable associations between an oath, religion, patriotism, the perceived quality of American products and the sanctity of American jobs all used to market a weapon.

I wonder how would other religions react to such an ad? Would the Muslim world be upset to see their Koran used in a casual (and perhaps even well intentioned) advertisement? What about the Jewish communities? Would they allow the use of the Tanakh to market a gun or something else? My hunch is that they too would be upset.

One of the ironies here is that the Bible is clearly labeled "Holy Bible". "Holy" or "sacred" suggests that it is meant to be set apart from. Here a sacred text is used as a marketing tool within the market economy which runs in great contrast to the economy of God and grace.

I know that I am not the only one likely to be upset by this, but I wonder why more people are not upset. I posted the ad on Facebook and have had mixed reviews on whether it is offensive. People I consider thoughtful Christians come out on either side. What is it about this ad that irks me so?

Is it my sacramental sensibilities about the nature of "holy things"? Is it my general distaste for the market economy? Am I just a cynic who takes pleasure in critiquing the world around me? Perhaps. But then again, I cannot help but wonder if we have become so desensitized to marketing that we fail to see a transgression when it is in front of us. If the product were to change, would this then ruffle peoples feathers? Mentally go through a list of household items and consider the ad. Skittles. Tampons. Baking Soda. Motor Oil. Shampoo. Do any of these change your reaction to the ad?

Similarly, have we so domesticated the sense of the sacred that we no longer care how our sacred texts are used? I cannot help but to think of Stanley Hauerwas' provocative opening chapter of Unleashing Scripture: Freeing the Bible from Captivity to America. He starts out saying,
"Most North American Christians assume that they have a right, if not an obligation, to read the Bible. I challenge that assumption. No task is more important than for the Church to take the Bible out of the hands of individual Christians in North America. Let us no longer give the Bible to all children when they enter the third grade or whenever their assumed rise to Christian maturity is marked, such as eigth-grade commencements. Let us rather tell them and their parents that they are possessed by habits too corrupt for them to be encouraged to read the Bible on their own.

North American Christians are trained to believe that they are capable of reading the Bible without spiritual and moral transformation. They read the Bible not as Christians, not as a people set apart, but as democratic citizens who think their 'common sense' is sufficient for 'understanding' the Scripture. They feel no need to stand udner the authority of a truthful community to be told how to read. Instead they assume that they have all the 'religious experience' necessary to know what the Bible is about. As a result the Bible inherently becomes the ideology for a politics quite different from the politics of the Church.

As shocking as Hauerwas' statements are, there is part of me that wants to agree and particularly in connection to this ad. If the Bible would be taken from the democratic economy, perhaps it would regain its sacredness. Then, I suspect more people would be offended by ads such as this in its casual use of imagery and patriotic ideology. Do we so easily forget that this text contains the narrative of God's interaction with humanity, whereby we can come to know Jesus the Christ, inspired in some way by the Holy Spirit? Are we reading the scriptures with this weight upon us and upon the words, or have have they become so mundane that we no longer see them through an appropriate lens?

But then again, perhaps I am just a cynic who likes to critique everything around me.
Posted by rstander at 7:35 PM

Email ThisBlogThis!Share to TwitterShare to FacebookShare to Pinterest
Labels: consumerism, misc., theological musings
Newer Post Older Post Home
An axis of access is a sacred place which our life revolves around. We hold them dear in our memory. They thrive in our imagination. They root us to this world. (To read more about the nature of this blog read the originating post from 08.07.07)