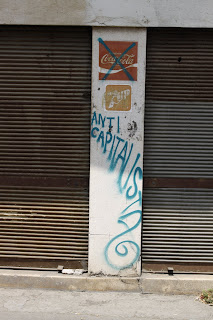 One of the things that struck me about Cyprus were the ubiquitous American consumer logos...Coca Cola, Starbucks, TGI Friday's, Bennegins, Pizza Hut, McDonalds, and the list goes on and on. I should not have been surprised given the state of globalized commercialism. And yet, I found signs of displeasure with it. Within moments of our arrival in Nicosia, I saw the "McCancer" stencil not far from the a tourist area near the border. I began to see more and more of these subtle stenciled works.

I began to think of these not simply as graffiti dirtying up the walls of the city, but as contests over place. In my posting from 2 weeks ago about Cyprus and contested space, I noted that, "the island rests divided by political, religious, and other ideological space imprinted upon the literal space of the island." Here is a physical space that has come to carry an ideological critique. An "anti capitalista" ideology must live among some segment of this community to emerge into an attempt at claiming space.

I find these subversive and witty little stencils compelling evidence of contested space. 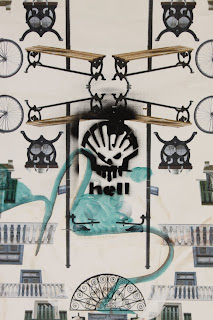 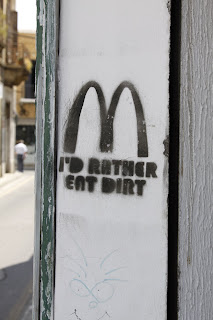 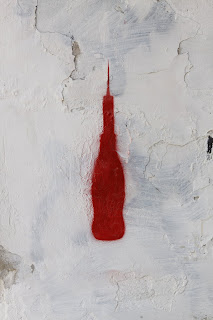 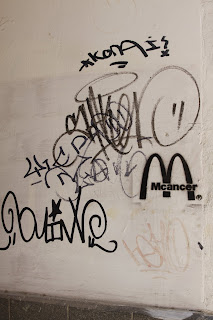 Email ThisBlogThis!Share to TwitterShare to FacebookShare to Pinterest
Labels: Art, consumerism, contested space, graffiti, photography, PKAP, sacred space
Newer Post Older Post Home
An axis of access is a sacred place which our life revolves around. We hold them dear in our memory. They thrive in our imagination. They root us to this world. (To read more about the nature of this blog read the originating post from 08.07.07)