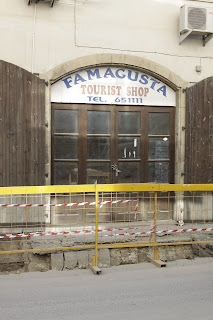 Yesterday morning I sat out on the balcony to read and enjoy some coffee as Larnaca slowly came to life. I picked up Philip Sheldrake’s Spaces for the Sacred again to review his comments on contested space…another of the central ideas following me in Cyprus. Even long before the 1974 revolution, this place has been contested…likely even back to the times of the ancient settlements that we are excavating. Looking on the internet I learned of the shooting at Holocaust Museum in DC. This tragic event is only additional proof of the contested nature of space and memory.

The DC event is not unique but it is complex. The museum, full of painful memory for most of the world, rests in an uneasy tension, like the sites of the Holocaust themselves, between the extremes of sacred and profane sites. They are at once set aside, protected, and made visible for memorial purposes, thus they seem to function like many truly sacred sites. And yet, they are record to the horrific atrocities that humanity is capable of. A sort of complexity begins when the ideological, political space is enacted or embodied within a literal space. In the DC event, an anti-Semetic ideology become embodied in a violent action within this space. While I dare say that most of the world would acknowledge the Holocaust and its lingering memories and sites, this was an act of contesting both space and memory.

I mention this all as preface to the Cypriot situation. Here the island rests divided by political, religious, and other ideological space imprinted upon the literal space of the island. The North and its Turkish influence is often painted as the aggressor holding the Greek land hostage since 1974. While this past is too complex and long for me to recount here (as if I even know enough about it to do so), Cyprus is a fine example of contested space. A few days ago Becky Savaria, and undergraduate from Messiah College made a fine posting on the PKAP Undergraduate Blog regarding these tensions as they are made evident here in Larnaca (a central city within the Greek side of the island). Greek Cypriots who were displaced during the revolution have employed some subtle and not so subtle ways of carrying on their memories of the 1974 events (As Becky's post suggests). The image here is another of those place memories that inheres a political statement as well. Famagusta is one of the Turkish occupied cities lost to the North in '74. This shop owner, and many like them, keep the collective memory alive, as well as their political allegiance in a public way. For many tourists who do not know the tragic history of this remarkable island, these are simple store names rather than signs of contested space and memory.

Place studies have historically focussed on a singularity of meaning the work of Mircea Eliade's work. Not until recently have scholars begun to question the political nature of place/space and the pluralities of meaning and interpretations offered by distict people groups. Place in general, and sacred spaces in particular are "just as likely to cause division as provoke consensus and harmony" (Sheldrake, 5). Once postmodernity had moved past Eliade's modern concepts of singularlized placed meaning, we are allowed to see the power of naming place. Paul Ricouer also suggests that we look to the narrative of the oppressed and in so doing we examine place by which stories are being told and which are being suppressed. The French philosopher Henri LeFebvre reminds us that the ways of which we understand space is historically conditioned. His "socio-spatial outlook" becomes our means of orienting both ideologically and literally in our environments. It would seem that the metanarratives of those in power become culturally and even in the case of these images, architecturally embodied to reinforce the Greek Cypriot narrative. Sheldrake reminds us that with such images or narratives of power, there seems to be a responsibility to explore the variety of meanings (told and untold) upon any given site.

What does this mean for photography today, and for me particularly on a residency in an ongoing contested space? I haven't work this out yet, but when I look at other contemporary landscape photographers like Jeff Brouws, Edward Burtynsky, John Ganis and others, ones notes a sort of objectivity of their work, a sort of banality in composition renders these politicized places as cultural oddities. Certainly their choice of subject denotes a subjectivity of the artist, but they are imaged in a manner that offers sort of enduring grace in the degraded environment. Could this be a way forward? Can such images be made of contested spaces that are open enough in meaning to allow suppressed narratives to emerge? Can the two coexist in an image?

Sorry for the roughness of these thoughts...writing usually helps me clarify my thoughts. I think these need more work.

Email ThisBlogThis!Share to TwitterShare to FacebookShare to Pinterest
Labels: contested space, photography, PKAP, sacred space
Newer Post Older Post Home
An axis of access is a sacred place which our life revolves around. We hold them dear in our memory. They thrive in our imagination. They root us to this world. (To read more about the nature of this blog read the originating post from 08.07.07)