Catholicity and the New Topographics V 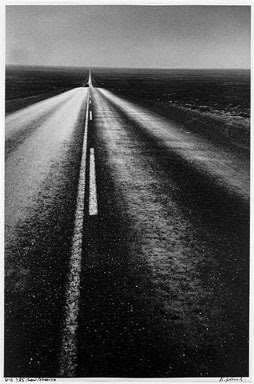 Most commentators general pick up on two primary photographic influences when speaking of the New Topographics: Robert Frank and Edward Ruscha. Much has been said about Ruscha’s influence upon the group, though quite obvious, it has also historically been guided by Jenkins’ who goes to great lengths in the catalogue to argue for the groups’ connection to the work of Ruscha. Less, however, is said about the groups lineage to Frank. Though, Lewis Baltz, one member of the New Topographics group, has said in an essay that the group took “Robert Frank as their mentor and the snapshot as their vernacular model.”[1]

Certainly Ruscha’s prominence in Jenkins’ writing is appropriate. And yet, their work deserves basic comparisons to the work of Swiss-born Robert Frank. Frank’s social landscape project entitled The Americans first published in the United States in 1959, one year after its release in France, introduced a new form of straight photography in the snapshot relying upon the convenience of the lithe 35mm. Frank introduced a new generation of photographers to a haphazard picture taking that cared more about documenting the present and less about the technical aspects of the medium. This careless methodology or inattention to traditional composition and focus was certainly picked up upon by later generations.

However, Frank’s largest contributions to the New Topographics stem from his documentary style which introduces a sense of irony and neutrality while photographing common life. Here Frank struck a balance between cool objectivity in observance of the mundane. Frank photographed his way across America between 1956-1957 sticking close to larger cities.[2] It is no coincidence that his traveling partner during those days was Jack Kerouac,[3] who published his rambling journey On the Road the same year as Frank’s The Americans was released Stateside. Both express a similar vision of restlessness and alienation[4] in what has been suggested as the kairos moment, pregnant with the enduring American myth.[5] Derrick Price suggests that this project “fractured” the old documentary project of recording the weighty event by Frank’s turn toward the prosaic.[6] By photographing the common place, Frank is shifting the defining balance of identity from the grand moments in history to mundane reality of life. By concentrating on automobiles, roadsides, and the commercial signs certainly influenced photographers to make similar pilgrimages across the land attempting to photograph the always shifting American identity. This investiture of the common life and subject through a reliance upon amateurish techniques and objectivity deeply influences both Ruscha and the New Topographics.