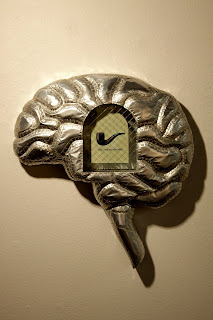 The 2009 University of North Dakota faculty show brings together a diversity of works from the artists respective fields spanning from various sculptural works to photography and metalsmithing to printmaking. Here new media works hang next to the traditional ones that is also suggestive of the overall direction of the Art and Design programs of UND.
The individual works reflect over-arching themes present in the much contemporary art. In their book Themes of Contemporary Art: Visual Art Since 1980,[1] Jean Robertson and Craig McDaniel, suggest six central themes that run throughout contemporary art including time, place, identity, the body, language, and spirituality. Joel Jonientz time-based works 11.20.63, reflect the mundane moments in time and place for J.F.K in the bathtub and Oswald eating breakfast before the convergence of the two men in the assassination plot two days later. Suzanne Gonsalez’s work suggest themes of identity, the body, an existential reality of loss. Gonsalez work also suggest the larger trend of using ones own narratives to create autobiographic works. Both Jennifer Nelson and Wes Smith, in their respective mediums reflect upon the latent symbols of home. Similarly, Wes Smith’s work also is suggestive of the place. Rick Tonder’s landscapes neatly fall into themes of place and time. Lucy Ganje’s work may well fit under ideas of place and time as well. However her work might fit under what some would call history painting. Her work reflects a post-modern directive of revisionist history challenging the prevailing assumptions long suppressed by another story. Echo Eggebrecht’s painting sketch would suggest by its content and title an affinity with a plurality of religious symbols and ideas. Similarly Patrick Luber’s work would also fit under that same spiritual theme but by using mixing popular culture and specifically Christian concepts and/or narratives. Luber’s Christ Exits the Tomb draws upon two historical stereotypical portrayals of Jesus either as a superhero or an effeminate peacemaker.

We may also look beyond content theme into method to suggest a connection to the larger trajectory of the art world. The influence of the new media is evident even from a casual glance. Works by Jonientz, Gonsalez, Ganje, Scott Telle, and Tonder all reflect the influence of the digital world. While Jonientz’s work stands as being a distinctly digital work (and two of three that has sound), the others work in more traditional fields that have moved solidly into digital means. All three photographers, Tonder, Gonsalez and Telle’s work are digital prints, of which two are composites of images. All five likely reflect work done in one or more of the Adobe programs and work flows, another sign of contemporary art.
One factor that may go unnoticed the number of women represented in the show. Of the seventeen displaying artists, seven are women (roughly 41%). This would seem to reflect a larger historical trend for diversity that would include both race and sexual orientation that has emerged over the past 30 years. This burgeoning spectrum of diversity has greatly impacted the art world, as well as the space of Hughes Fine Art Center.

With my interest in concepts of place and its dialectic of formation, the works by Nelson and Smith were intriguing. Both have referenced the idea of home. The home can be the stage for our earliest memories, the award for achieving the American dream, a threshold between the public and private worlds, as well as symbolize a metaphorical or virtual space that would suggest a variety of psychological responses depending upon ones experiences. For many the home may represent a sense of belonging, while for others it may signal abuse. Nelson’s No Place Like Home places a house between two spread legs in with feet in red glittered shoes drawing upon the cultural collective memory of Dorothy’s red slippers in The Wizard of Oz. Here the viewer seems to be confronted with either a sexualized desire of or for a house in a literal sense or the making of home in an erotic sense.
Nelson’s other work, Take Me Home once again draws upon imagery of the home. Here, two houses, one floats above and angled over the other are reminiscent of something one might see in a home brochure or advertisement. Their meaning is clarified when the viewer understands whose house it was. This was the beloved home of the Waltons.

Is Nelson commenting upon our cultures desire for both house and home? Could it be a comment upon the home improvement industry as prostituting the house as a home? Certainly it is about the hope for the American Dream…its lure…its glittering temptations. These ideas become even more poignant under the weight of current economic depression that began with the ubiquity of home foreclosures.

Email ThisBlogThis!Share to TwitterShare to FacebookShare to Pinterest
Labels: Art, artists, North Dakota, University of North Dakota
Newer Post Older Post Home
An axis of access is a sacred place which our life revolves around. We hold them dear in our memory. They thrive in our imagination. They root us to this world. (To read more about the nature of this blog read the originating post from 08.07.07)