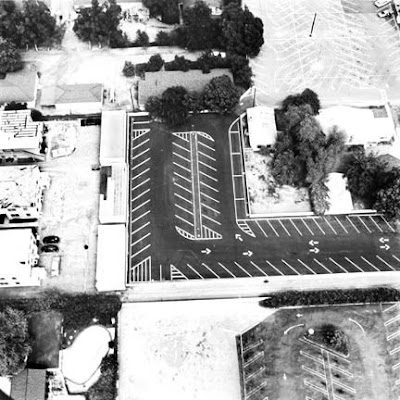 A quick glance at Ed Ruscha’s work and his lineage with the New Topographics is obvious. Ruscha transcends clear definition as an artist working between painting and photography, often considered a force within the conceptual movement. And yet Ruscha considered himself a hobbyist photographer. Ruscha has claimed the two most prominent photographic influences upon him were Walker Evans and Robert Frank’s The Americans.[1] Influenced by Evan’s “dead pan documentary vernacular subjects and Frank for his grainy improvisational style”[2] Ruscha set out searching for his own voice which soundly emerged in the 1960’s. Ruscha obsessed with signage and building design, an ever present attraction to the same subjects all filtered through a wry sense of humor.

Ruscha’s work can be filtered in a number of ways but becomes most connected to the New Topographics when interpreted through studies of the readymade and topography.

In 1963 Ruscha visited a Marcel Duchamp retrospective at the Pasadena Art Museum reinvigorating his interest in the common object or readymade. That same year, Ruscha published the first of many small photographic books, inspired by Frank’s The American’s. His forty-eight page Twentysix Gasoline Stations offers a reconsideration of Duchamp’s concept of the readymade reinterpreted through his interest in architecture. Twentysix Gasoline Stations were cheaply printed in a mass production, non-narrative style which mirrored the subjects utilitarian architecture.

Ruscha carried this serial interest in specific topics and non-descript books into an investigation of the California landscape with the releases of Some Los Angeles Apartments (1965), Every Building on the Sunset Strip (1966) (#10), and Thitryfour Parking Lots in Los Angeles (1967) (#11-14). The second in this series images random, utilitarian architecture of the 50’s and early 60’s through what could have easily been seen as images for realtors or surveyors.[3] For the third in the series, Ruscha mounted the camera to a car and drove the length of the sunset strip, recording every building at noon to reduce shadow heightening the banality of the image. The book was then released as an accordion-like fold out with the images all connected. For the fourth release he addressed another formal concern more directly in terms of style. Ruscha hired the commercial photographer Art Alanis to capture the vast expanses of asphalt parking lots surrounding malls, stadiums and drive-in theatres. He had already experimented using others to shoot the gas-stations in 1963. But this is an advance in that step at the depersonalization or style-less style, something that would influence many of the New Topographics. William Jenkins goes into great detail about Ruscha’s influence upon this group saying,
“The pictures were stripped of any artistic frills and reduced to an essentially topographic state, conveying substantial amounts of visual information but eschewing entirely the aspects of beauty, emotion, and opinion. Regardless of the subject matter the appearance of neutrality was strictly maintained…There is an obvious visual link between Ruscha’s work and the pictures shown here. Both function with a minimum of inflection in the sense that the photographers’ influence on the look of the subject is minimal…The exhibitors also share subject matter with Ruscha, picturing, almost without exception, man made structures within larger contexts such as landscapes. ”[4]

Ruscha’s influence upon the group can hardly be underestimated. Many of the snippets discussed above: neutrality, style-less style, seriality, the readymade all become prominent aspects in the work of the New Topographics and their descendants.
[1] Sylvia Wolf, Ed Ruscha and Photography, (Gottingen, Germany: Steidl, 2004), 20-21.
[2] Wolf, 21.
[3] Wolf, 129
[4] Jenkins, 5.
Posted by rstander at 9:56 AM